We helped to promote the Thomas Jefferson chapter of AMF as they began holding meetings to empower grieving students and bring awareness to grieving young adults.The meetings focus on support, and engaging students in community service, specifically oriented towards helping young adults who are experiencing illness or death of loved ones being treated at Thomas Jefferson Hospital. If you are interested in learning more about this group contact jeffamf@jefferson.edu.

JeffHELP invited students to learn about youth suicide through a personal survivor story. A discussion was held talking about risk factors, warning signs, and steps one can take in their personal lives to save lives.

Over 300 candles were lit in the evening at Lubert Plaza for suicide prevention. Candles were donated both for awareness or  in someone’s honor or memory.

Three one hour workshops were offered to expose mindfulness theory and practice in a group setting so students could begin their own journey to greater ease, and knowledgeably answer patient questions and appropriately prescribe the intervention.

Minding Your Mind: Coping with Stress, Anxiety, and Depression

Carl Antisell, a dynamic speaker from Minding Your Mind Foundation, shared his personal struggle with mental illness and his journey to recover from addictive substances as a way to relieve his ongoing anxiety and depression. Carl is now in long term recovery and has not used drugs or alcohol in over three years. He shared some healthy and effective ways to handle those emotions especially when faced with challenges in everyday life.

A Stress Free event was  held for the Jefferson community sponsored by JeffHELP SERV and co-sponsored by SIGN (Student Interest Group in Neurology). There was guided art therapy, independent art projects, photo booth, karaoke and  live music from Jefferson’s own Chamber Orchestra quartet, and the guitar group the Fender Benders . It was a fun, relaxing time, creating art, taking pics in the photo booth, listening to great music, eating yummy food, and sipping cozy beverages.

A new program for students, JeffSERV is a program designed by students specifically for Thomas Jefferson University. It is comprised of students who wish to offer themselves to their peers who need some additional support and would like someone to talk to their current concerns. You can schedule a meeting with a JeffSERV member or learn more here.

Sponsored by Active Minds and JeffHELP, a de-stressing fair was held at Hamilton Lubert Plaza in early April, featuring therapy dogs, painting, cookie decorating, and planting a seed. It was a great time to unwind and figure out future ways to relax and reduce stress in one’s life.

Breaking Bad: Why you should be a friend and not a therapist

Alanna Gardner and Malyka Cardwell, of Philadelphia MFT, helped attendees by providing tools on how to create healthy boundaries between one’s personal and professional life, especially difficult for those in helping professions.

How to Have a Healthy Relationship: Building on the Basics

Danielle Adinolfi and Brian Swope, MFT, brought to light what a healthy relationship is and explained how to integrate those very same concepts into everyday life with significant others.  To see a video of their presentation, click here.

The Student Personal Counseling Center (SPCC), in conjunction with the Career Development Center, hosted a seminar about how to overcome interviewing stress and anxiety. They presented methods that help manage stress and feel more confident during interviews.

Jefferson, in association with Dr. Randi Platt, was able to offer a Mindfulness Meditation workshop for all students and house staff. This four-week long workshop helped instruct attendees on techniques to use in everyday life to help reduce stress and increase attentiveness

In conjunction with Active Minds, JeffHELP welcomed Melissa Hopely, from Minding Your Mind. She shared her struggle with obsessive compulsive disorder (OCD) and depression. Her story helped provide insight into ways to combat stigmas associated with mental illness. Over 100 people attended this event.

On September 10, we hosted our first Employee Mental Wellness Fair on National Suicide Prevention Day. The fair, which took place in the Gibbon Building Atrium, allowed employees to learn about resources available through JeffHELP, and FirstCall. The American Foundation for Suicide Prevention hosted a table with a memory quilt display. Fair attendees could view and post encouraging messages on our marker boards, as well as participate in the Reasons to Live contest. We also hosted a photo booth for fun pictures with co-workers, or to take pictures with one of their reasons.

We offered trainings for students interested in being a listening ear for their friends and classmates. This workshop provided information on how to know when someone is in distress, and ways to offer help, ask appropriate questions, and offer necessary resources.

Since the theme of Flu Fest was Hollywood, the Student Personal Counseling Center offered the opportunity for Flu Fest participants to show “Our Strengths, Our Star Power”. Students were able to share a challenge they overcame and anonymously write it on a gold star. All of the stars were displayed at Flu Fest, along with images of celebrities and the challenges they overcame.

Jordan Burnham shared his miraculous story of hope and survival. When Jordan was in high school, he attempted to take his own life by jumping out of a 9 story window. He openly and honestly talked about his struggle with depression, his physical and emotional recovery, and how he maintains healthy mental health. This talk was followed by a question and answer session. 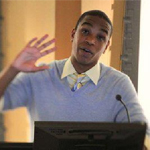 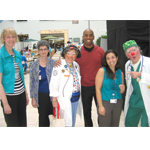 In Spring 2013, we set out to gather 2,013 reasons to live by the end of the year. By November 2013, JeffHELP reached its goal of 2,013 reasons to live, and then some! We reached this goal with the participation of employees and students, many of whom were randomly chosen and rewarded with prizes. Their reasons to live ranged from funny to poignant and their prizes ranged from Phillies tickets to iPad cover/keyboards, to t-shirts and mugs! Want to let us know your reason? Go to http://reasonstolive.jeffhelp.org/ and put in your 3 word reason, and see the many reasons that were posted by others.

JeffHELP participated in National Walk @ Lunch Day which started at Lubert Plaza and culminated in Rittenhouse Square. There we gathered with other walkers from across the city. Mayor Nutter was there to greet everyone, and we were able to give him a “Reasons to Live” t-shirt.

We set up tables around campus to sell our “Reasons to Live” t-shirts and JeffHELP travel mugs. These fun products help us fund future programming for both employees and students. If you’re interested in purchasing one, you can find them in the Jefferson Bookstore, or by contacting Rose. 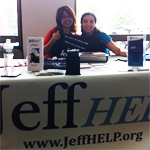 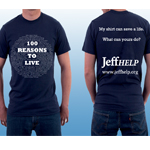 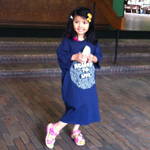 JeffHELP sponsored the play, Dog Sees God, which is an unofficial parody of the classic comic Peanuts. It is about the characters as teenagers, each with their own search for identity. The characters deal with drug use, suicide, eating disorders, teen violence, rebellion, and sexual identity. Following the play there was a panel discussion with a question and answer session.

JeffHELP organized a full week of suicide prevention programming in honor of Suicide Prevention Week September 10-14th. Our team set up a table during the Student Organization Fair, where we handed out brochure, magnets, and wallet cards in addition to information about getting involved with JeffHELP. On the 12th, JeffHELP along with several other campus groups and organizations sponsored Minding Your Minds Foundation’s speaker, Francesca Pileggi, who shared her personal story of her struggles with and recovery from depression and anxiety. On the 14th, we held our second annual memorial event for survivors of suicide loss in the Gibbon building meditation room. Survivors could use this time and space to reflect and remember those they lost to suicide.

JeffHELP returned to hosting a table at Flu Fest again this year. Our project team used this opportunity to give away over 700 water bottles, 500 pens, and 300 blue stress brains! Student also had access to JeffHELP magnets, brochures, and suicide prevention materials. The SPCC staff was on hand to answer questions about counseling at Jefferson and to promote an upcoming mindfulness workshop. The highlight event was the 100 Reasons to Live photobooth. Students and staff helped us meet our goal, providing our campaign with 100 reasons  in addition to many fabulous snapshots. 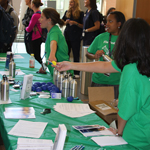 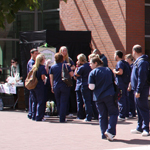 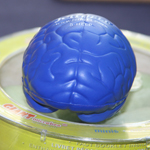 This April, JeffHELP sponsored Alcohol Awareness activities and events. The SPCC continued its ongoing series of How to Help Friends, Family, and Patients with a discussion on the topic of Adult Children of Alcoholics, with a representative of the organization present to answer questions. Additionally a panel discussion focused on the effects of alcohol abuse in both one’s personal and professional life. Lastly, JeffHELP participated in the Residence Life Luau by providing umbrella straws with Hawaiian-themed responsible drinking messaging. Blood alcohol chart wallet cards were distributed at the event as well.

Before I Die Display

During the Spring Drive-In Movie showing of The Muppets, JeffHELP set up a three black markerboard display with the words “Before I Die…” written across the top of the boards. Students were then encouraged to write down their own personal goals/bucket list items with the neon markers. The responses, though highly varied in theme, tended to focus largely on academics and travel.

On February 22nd, all Jefferson students had the opportunity to watch the OurSecrets video featuring the secrets they submitted to JeffHELP during the Wellness Fair back in the fall. Following the film, Dr. Wintersteen led attendees in a discussion about the issues surrounding keeping secrets and how they affect student life. Several people contributed ideas about how to improve life at Jefferson based on the struggles their peers revealed on the secrets cards.

The SPCC sponsored a 4 week Mindfulness Stress Reduction Workshop during the month of February. Led by a certified Mindfulness instructor from the Center for Integrative Medicine, students learned the definition of Mindfulness and then began to practice it through instructor led exercises. Attendees practiced body scans in which they were to take notice of the physical sensations in their bodies and the environment without judging the observations. Walking meditation and a sighing exercise were also taught and then the student’s experiences were discussed as a group.

JeffHELP partnered with the Student Personal Counseling Center to host several informational tables at the Flu Fest last month. SPCC offered mindfulness workshop and biofeedback session sign ups in addition to providing brochures about their services. Dr. Nobleza and Dr. Blue and Amy were on hand to answer any questions students may have about the SPCC and JeffHELP. Syringe pens containing the SPCC phone number were given to attendees and mini phone key chains also with the SPCC number were available to the students.

On Tuesday, Sept 27, 2011, JeffHELP hosted a memorial event for survivors of suicide as part of National Suicide Prevention Awareness Day. Coordinated by Dr. Biddle, the hour of reflection was held in the meditation room on the 9th floor of the Gibbon building. This was an opportunity for those who had lost someone to suicide to remember, grieve, or reflect. Attendees were given the option to write their loved one’s name on a piece of paper and then a bell was rung once for each name. Information and resources were available as well as a survey to determine interest in creating a survivors’ support group at Jefferson.

I awaken in the morning feeling happy and enthusiastic about life.

JeffHELP is funded under award 1U79SM060468 by the Substance Abuse and Mental Health Services Administration (SAMHSA). The views expressed herein do not necessarily reflect the official policies of the Department of Health and Human Services; nor does mention of trade names, commercial practices, or organizations imply endorsement by the U.S. Government. © 2023 Thomas Jefferson University. All Rights Reserved.
Powered by Brand Revive